I read and reviewed Mandel’s Station Eleven several months ago now, and it was one of my absolute favourite novels of last year. A post-apocalyptic novel that’s much more about people than about the apocalypse, a travelling theatre company who perform Shakespeare in the face of the end of the world, an interesting narrative structure and a lot of well-developed characters with subtle links to one another – it’s a perfect, brilliant, wonderful novel. So I was very excited and very nervous when I picked up The Lola Quartet.
Keep reading »
Posted by katielumsden at 11:00 2 comments:

Things - Shakespeare and Me

Today it is Shakespeare’s birthday. This of course requires some celebration.

In an unusual way, I grew up with Shakespeare. My dad is a theatre stage manager, and when I was a child he worked for the Royal Shakespeare Company. He worked in London most of the year, but for six weeks every Spring, he’d be based at the RST or the Swan Theatre in Stratford-upon-Avon, Shakespeare’s birth place. My mum, my brother and I, would pack up the car and drive there every weekend, and we’d spend February half term each year in Stratford. Me and my brother slept on camp beds in those little cottages opposite the Royal Shakespeare Theatre. I learn to ride a bike in the park next door.

I think the first Shakespeare play I saw was A Midsummer Night’s Dream, when I was about six. I don’t remember it, but I do remember seeing The Twelfth Night when I was nine, As You Like It and The Tempest when I was twelve, Macbeth when I was fifteen and on and on. I remember watching rehearsals at the Globe theatre in the summer holidays and helping clear the stage of the Pit at the Barbican after a show. Before I wanted to be a novelist, I wanted to be a playwright. Or, more accurately, I wanted to be Shakespeare. In my parent’s house we have at least as many books on Shakespeare as books actually containing Shakespeare’s plays. We also have at least two Shakespeare-themed tea towels, and three giant Shakespeare posters on the wall. I’ve now seen thirty out of thirty-seven Shakespeare plays, and I’m trying my very best to see them all before the age when my parents first managed it.

What is strange for me, I suppose, it that Shakespeare has been a very constant presence in my life. I distinctly remember discovering Dickens, Jane Austen, the Brontës, Banana Yoshimoto – but I have no memory of discovering Shakespeare. Shakespeare has just always been there, on family bookshelves, on the stage, in my head. 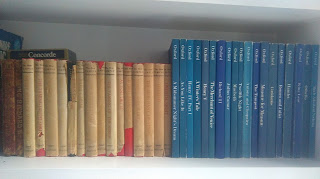 Part of the #beyondthecover Blogathon 2016

Let us take a moment to bask in the glory of this adaptation. I am probably (definitely) biased, by the fact that Charles Dickens’s Our Mutual Friend is my favourite novel of all time, and by the fact that this TV adaptation was my first introduction to that magnificent novel – but I genuinely think it’s a beautiful, elegant, well-written mini-series, one that most lovers of costume drama will enjoy. It’s six hours of Dickensian glory.

The novel Our Mutual Friend follows the fate of a fortune. After the dead of Old Mr Harmon – a man who made his money through collecting and sifting through piles of rubbish and dust from the streets of London – his fortune is all set to go to his son. Until this very son goes missing on his journey back to London, only for his body to be pulled out of the Thames a few days later. The book follows the lives of the people affected by the Harmon will and the Harmon murder, from the girl betrothed to young Mr Harmon, to the family of the man who found the body, from the servants who inherit the fortune to the lawyers investigating the case.

Books – Miss Pettigrew Lives for a Day, by Winifred Watson

Now I don’t tend to read happy books. This may sound like an odd statement, and yet it’s too often true. I enjoy heart-wrenching books, books that tear your soul a little bit, and so sometimes I end up reading nothing but sad books for weeks on end. There’s occasionally a little burst of Dickensian or Austenite happiness, but I for the most part I read dark books, grim books, books that are liable to make you cry on the train to work. Reading Miss Pettigrew Lives for a Day, I remembered the beauty of happy books, of books that only make you want to cry with joy.

Published in 1938, Miss Pettigrew Lives for a Day tells the story of Miss Pettigrew, a middle-aged impoverished nanny. In search of a new position, she ends up knocking on the door of the young and beautiful Miss LaFosse, and is suddenly drawn into a new and different world. For just one day, Miss Pettigrew’s steps into Miss LaFosse’s Bohemian and dramatic life. She is astounded and excited, and astounds those around her. It’s like if a (less perfect) Mary Poppins met and got caught up with Evelyn Waugh’s Bright Young Things and decided to just go with it. It is beautiful.
Keep reading »
Posted by katielumsden at 11:00 No comments:

Now I don’t normally review non-fiction – but I do spend a lot of time talking about Dickens on my Booktube channel, and in my efforts to read more non-fiction, I figured I ought to put a Dickensian spin on it somewhere.

The Invisible Woman, by Claire Tomalin, is a biography of Ellen Ternan, a woman who literally erased herself from history. Nelly Ternan was Charles Dickens’s mistress. They met in 1857, when Nelly was eighteen and Charles Dickens forty-five. By 1870, at the time of Dickens’s death, they had been in some way together for over ten years. She lived in various houses paid for by Dickens, and he divided his time between her houses and his family home in Gad’s Hill. She read and helped edit his novels. They may or may not have had a child together. And yet Nelly Ternan remained a secret. After his death, she erased ten years of her life. She pretended to be ten years younger than she was, cutting out those years she’d spent with Dickens. On her death certificate, even on her grave, her children incorrectly recorded her age.

While his adoring public knew that Charles Dickens had separated from his wife, it would have devastated his persona as a man of domesticity if it were discovered that he also had a mistress. He protected his own reputation – and Nelly’s – by ensuring their relationship remained a secret, and by the time of his death, only a few close friends and some of his children knew of his and Nelly’s association. A few more thought they had an innocent friendship – that of godfather and goddaughter, not a romantic or sexual relationship – and there are still a few critics who stand by this, insisting that we don’t have enough evidence to prove that Nelly Ternan was actually Charles Dickens’s mistress.
Keep reading »
Posted by katielumsden at 11:00 No comments:

Note: I received an advanced copy of this book from the publisher in exchange for an honest review.

I knew very little about Shome Dasgupta’s The Sea Singer before I began reading it. The extent of my knowledge was that it was something vaguely to do with magical realism, was on Accent Press’s spring 2016 Young Adult list, and had an intriguing title. Whatever I was expecting, I was not expecting to be quite as blown away as I was. The Sea Singer is genuinely beautiful, strange and brilliant novel, one of the most original I have read. I remain a bit bemused as to why it’s being marketed as YA – for me it was just a brilliant piece of magic realism. It combines the matter-of-fact eccentricity of Daniel Wallace’s Big Fish with the magical beauty of Salman Rushdie’s Midnight’s Children with the matter-of-fact tone of Andrew Kaufmann’s All My Friends Are Superheroes.

The book tells the tale of March, who is born in the month of April in a small town in India. She quickly proves a rather unusual child. March cannot close her eyes. From the moment of her birth, she cannot sleep. She sits and watches the world, and then she sings. In fact, March sings so beautifully and impressively that her mother in fact spent the whole of her pregnancy fast asleep, because the unborn March was singing her lullabies from the womb. That is the kind of novel this is. It is very weird and very brilliant.
Keep reading »
Posted by katielumsden at 10:00 No comments: 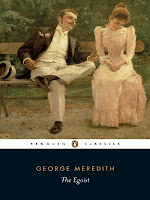 Now The Egoist was sat on the metaphorical bookshelf of my kindle for rather a while before I finally picked up. I first heard about it when researching the bestselling novels of the Victorian period, and was intrigued by the fact I hadn’t really heard of George Meredith before. I was half hesitant, half excited. When it comes to popular Victorian novels that have slipped from today’s literary culture, you can never be sure whether they’re going to turn out to be an underrated hidden gem or one of those deservedly-forgotten novels.

I was not disappointed. I thoroughly loved this book.

George Meredith’s The Egoist, published in 1879, follows a self-centred young gentleman, Sir Willoughby Patterne, and his attempts to marry. At the start of the novel, Sir Willoughby is jilted by his fiancée, Miss Durham, when she runs off with another gentleman. He spends a few years travelling abroad, before returning older and, to his mind, wiser. He soon courts and becomes engaged to a young woman named Clara Middleton, and everything looks set for a happy marriage. Until Clara and her father come to stay with Sir Willoughby at his country estate in the weeks leading up to the wedding, and Clara begins to realise she may have made a terrible mistake.
Keep reading »
Posted by katielumsden at 11:00 No comments:

Short Stories – This Isn’t The Sort Of Thing That Happens To Someone Like You, by Jon McGregor

About eighteen months ago, I read and reviewed Jon McGregor’s novel, If Nobody Speaks Of Remarkable Things. It was one of those novels that staggered me, that left me haunted by its beauty, its elegant, its sheer power. If Nobody Speaks Of Remarkable Things is a deeply moving and human account of the ordinary lives of the residents of one street on one remarkable day. It remains one of my favourite books of all time.

But somehow I’ve failed to pick up anything more by Jon McGregor in the last eighteen months. I’m not sure whether this has been a product of chance, or simply because I have so many hundreds of books I want to read – or perhaps because I so thoroughly loved and admired If Nobody Speaks Of Remarkable Things that I was half afraid of reading something else by Jon McGregor, in case it would fail to live up to the superb beauty of that novel. And then last month I finally picked up his short story collection, This Isn’t The Sort Of Thing That Happens To Someone Like You, and proceeded to nearly cry on the train because of the utter beauty of his writing.
Keep reading »
Posted by katielumsden at 11:44 1 comment:

Email ThisBlogThis!Share to TwitterShare to FacebookShare to Pinterest
Labels: book review, if nobody speaks of remarkable things, Jon McGregor, literary fiction, Short Stories, this isn't the sort of thing that happens to someone like you
Newer Posts Older Posts Home
Subscribe to: Posts (Atom)