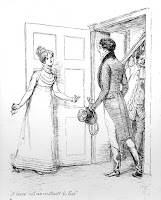 It is a truth universally acknowledged that Jane Austen is awesome.

She probably ranks as my second favourite author of all time (second, of course, to the glorious Charles Dickens). I have read now read pretty much everything she wrote – juvenilia, unfinished pieces, letters and all – and I’ve read all her novels at least twice. I’ve read biographies, seen an awful lot of screen adaptions of her novels, read quite a few book adaptions (and may or may not have attempted to write my own book adaptions…) and I even spent a year getting paid to dress up in regency gear and tell people about Jane Austen. It slightly unnerves me that while working at the Jane Austen Centre, I kept accidentally referring to her simply as ‘Jane’, like she a good friend of mine. Although in a way it sometimes feels like she is.

So today it is 240 years to the day since Jane Austen was born, and it’s lovely to note that we’re still reading, studying and loving her books after all this time. I’m currently running a Jane Austen Week on my Youtube channel, talking about a different Jane Austen novel every day – but I thought here I’d take a different angel. What I especially love about Jane Austen (beyond her biting social criticism, her beautiful love stories and her brilliant wit) are her characters. She has a lot of them – Emma alone has over seventy named characters – and there are so many that I adore. And no, this post isn’t going to just be a long hoorah Mr Darcy (although, hoorah Mr Darcy!), because Jane Austen does so much more in her books that just create nice attractive heroes for her heroines and readers to fall slightly/madly in love with. Some of Jane Austen’s best characters are the minor ones, those deftly written, ruthless and worryingly human characters who made snide remarks from the back of the parlour. There are a lot of characters in Jane Austen I wouldn’t want to have round for tea, but some of these are my favourites to read about.

And so, in honour of Jane Austen’s birthday, here are my fifteen favourite of her characters. Hopefully you’ll find it a pleasant (if unconventional) mix.

Note: the following post is full of Jane Austen spoilers. If you have somehow miraculously evaded popular culture and do not know, for example, who ends up with who, I advise you to stop reading now.


15. Fanny Dashwood, from Sense and Sensibility

Now Jane Austen has a reputation for her feisty heroines and smouldering heroes, but people often forget just how brilliantly she does what can only be described as sheer nastiness. Fanny Dashwood earns her place here simply because of that scene at the start of Sense and Sensibility where she slowly and brilliantly manipulates her husband into not giving any money whatsoever to his half-sisters. It is my favourite scene in that book, and is superbly written.

Let’s take a moment to appreciate Miss Bates. After all, she doesn’t get enough appreciation. Yes, she is silly, and yes she is a little frantic and we, like Emma, are perhaps occasionally inclined to find her annoying, but she is a marvellous character. Her dialogue, those long repetitive speeches, are brilliantly written. And she means well.

13. Caroline Bingley, from Pride and Prejudice

From the eternally well-meaning to quite the contrary… As I said, I adore Jane Austen’s silly and nasty characters. I like Caroline Bingley because she is hypocritical and unpleasant, because she fanes niceness she never feels, and doesn’t really care about anybody’s happiness but her own. What I really like about Austen’s nasty characters is that they’re very humanly nasty; they may be exaggerations, but we’ve all met someone with a touch of Caroline Bingley in our time. I love Caroline Bingley, and it’s a shame that they often lessen her role in the screen adaptations. (One point to the 1995 miniseries for making more of her.)

Other interesting thing to note is this: usually in film adaptations of Pride and Prejudice, Caroline Bingley is represented and played by an actress several years older than whoever is playing Lizzy Bennet. However, there’s no evidence in the books that Caroline is older. She’s younger than Mr Bingley, who is only twenty-three, and Lizzy at one point refers to her as a ‘girl’, implying that perhaps they’re the same age, or even that Caroline might be younger. We tend to imagine her as older, perhaps because of the films, perhaps because of her greater economic independence – but it kind of changes how you think of her if suddenly you imagine her as an eighteen-year-old girl…

12. Mrs Bennet, from Pride and Prejudice

Now I like Mrs Bennet. Mrs Bennet gets a terribly hard time from a modern perspective, but if you look closely I think Jane Austen actually understands Mrs Bennet more than we often realise. Yes, she is silly and fun to laugh at, and yes she is obsessed with marrying off her daughters but, put yourself in her place in society at the time and wouldn’t you be too? None of her daughters are educated well enough to be governesses, and unless one of them marries well, they will have no income and no means of living after the death of their father. I think Jane Austen’s trying to get us to look at her from two angles: yes she is ridiculous, uncultured and silly – but look, she’s also human. (One point to the 2005 film for representing her well.)

11. Mr Darcy, from Pride and Prejudice

I couldn’t not, could I? Mr Darcy is not my favourite Austen hero, but there’s a reason why Mr Darcy has become such a symbol of male perfection. And it’s precisely because he is not perfect. He is proud, socially awkward and rather a snob. But he’s interesting and loved by many (and loved by me) because he is complicated and well-meaning, because his character development is brilliant, and because he is human.

A rival for Mr Darcy in many people’s books, and one I’m personally very fond of. One thing I love about Jane Austen’s characterisation of Captain Wentworth is the sort of tenderness he treats Anne with throughout the book, even when he is trying to force himself to fall in love with someone else. He’s a bit stubborn, yes, but he treats her with respect and a sort of involuntary affection throughout. It’s sweet. It’s nice. Go Captain Wentworth.

9. Mr Collins, from Pride and Prejudice

No, I do not especially envy Charlotte Lucas – but Mr Collins, it has to be said, is a marvellous comic creation. While working at the Jane Austen Centre last year, I developed a little test, which was pretty much fool proof: say the name ‘Mr Collins’ around a true admirer of Jane Austen’s works and they will smile. I think that says it all.

As I’ve already made pretty clear, I am very fond of Jane Austen’s nasty characters. Isabella Thorpe is one of my favourites – she is so funny, so manipulative, and she so completely deceives Catherine, in the funniest way. Although, of course, we should also remember that Isabella Thorpe is kind of deceived herself, and is young and naive. Yes, she’s not very nice, but I still feel a little bit sorry for her by the end.

7. Lizzy Bennet, from Pride and Prejudice

Like Mr Darcy, I like Lizzy because she’s complicated. She’s not always nice: we all know she’s a bit proud and also quite prejudiced, and she likes to mock and laugh at people. But I like her character development, especially because Lizzy’s realisation of her own prejudices involves reassessing not only her opinion of Mr Darcy, but also I think her opinion of Charlotte Lucas. I also like her relationship with Jane, her wit, and her refusal to act simply as other people wish her too. That’s not to say that she breaks Regency decorum – in comparison to Lydia and Kitty she mostly abides by society’s rules – but she does see the injustice of the society she lives in and tries to stand up to it where she can. And another favourite thing about Lizzy Bennet is her dialogue with Mr Darcy. Regency flirting. It’s hilarious and beautiful and oh how I love Pride and Prejudice.

How I hate her, and how I love to hate her. She is such a brilliant, funny, startlingly nasty character. Jane Austen just writes nasty characters so well, and Mrs Elton is one of my favourites. That awful way she calls Mr Elton ‘Mr E’, her snide remarks, that horrid way she tries to patronise Jane Fairfax, the way she infuriates Emma – it makes me wince and laugh and it’s brilliant.

Now Fanny Price is to my mind a very underrated character. I’ve heard a lot of people say she’s boring. (I even once had a university exam question which basically bottled down to: is Fanny Price boring?) But personally, I really like her. Yes, she is quiet, she is introverted, she’s not witty like Lizzy Bennet or Emma – but, for all her physical weakness and her inability to stand up to people, Fanny Price is very strong. She is more assured of her morals and own wishes that anybody else in Mansfield Park. She knows right and wrong and she knows her own feelings and she sticks to them, and that I think is rather brilliant. (Even if I do slightly wish that she had fallen in love with Henry Crawford.)

Anne Elliot is, I think, my favourite Austen heroine. I love that she is both quiet and steady, that she is introverted but not timid. I love that although she is unhappy and in pain throughout a lot of the book, she is still incredibly strong. I don’t mean in patience or in love necessary – but in her ability to act when it is required. Her presence of mind and swiftness of action after Louisa’s fall just shows what a strong and wonderful character she is. Anne is a very capable individual – she’s the Austen heroine you’d want to have around in a crisis.

Lady Susan, the protagonist of Jane Austen’s too often forgotten epistolary novella Lady Susan, is a brilliant example of Jane Austen’s parodies of horrible vain individuals. Lady Susan is Caroline Bingley meets Mrs Elton meets Mary Crawford, and so so much worse. She is vain, arrogant, and cares for no one by herself. She is hilarious, horrible, and utterly brilliant.

Now I’m not saying I’d rather marry Henry Crawford than Edmund Bertram (or am I?), but Henry Crawford is possibly my favourite of all Austen’s characters. He’s just brilliant. Ah how I hate him and oh how I love him. He’s not always good man, not even always nice man; he’s vain, careless, doesn’t really care about other people’s feelings – and yet he does love Fanny Price, for a while. There is a moment in which he almost reforms, but he doesn’t quite manage it. In this respect he’s a little like Willoughby, but I find Henry Crawford’s dialogue and wit more convincing and enjoyable than Willoughby’s. And even if Henry Crawford is probably not the man for Fanny Price, he is the first to really take note and see what is wonderful, beautiful and lovable about her. And I like him for that.

I’m going to be taking a little break from the blog over Christmas, but I’ll be back at the end of December to tell you about all the books I’ve read this year, and back in January with some more reviews.