Books – All I Know Now, by Carrie Hope Fletcher

I’m feeling distinctly out of my comfort zone here. I appear to have stepped out from beneath my usual warm duvet of fiction in order to review a non-fiction book. This is frightening. However, I’ve been following Carrie Hope Fletcher’s career for a while now with great interest, and so I couldn’t resist the opportunity to talk about her first book. Fletcher has made a name for herself in the last two or three years through her Youtube videos, which range from music covers to strange advice to general musings on books, tea Disney and cake. She’s also a singer and actor and is currently playing Eponine in Les Miserables on the West End. And now she has written a book. All I Know Now was published last month and, as somewhat of a fan of hers, I’ve been incredibly excited for its release. It certainly did not disappoint.

I hardly know how to describe All I Know Now. I suppose Fletcher’s own subtitle – ‘wonderings and reflections on growing up gracefully’ – describes it fairly well. It is almost a self-help book, a guide to the twists and turns and difficulty of being a teenager. It is, in Fletcher’s words, a manual to ‘the Teen Age’. It certainly is directed at teenagers, and especially the first two chapters (or ‘acts’, because the book is full of delightful theatrical references) seem very much aimed at those between the ages of eleven and sixteen. Yet the rest of the book goes beyond this. It’s been two years and a few days since I could legitimately call myself a teenager, but I still loved and learnt from this book. Fletcher has stories, tips and musings, some of which boarder on philosophical, on everything from the internet to depression, from romance to lying, from bullying to ambition. As I was reading this book, I kept thinking: Carrie Hope Fletcher, you are only six months older than me – how on earth can you be so thoroughly wise?


Yet it isn’t just three-hundred-and-twenty-two pages of advice. It’s also a funny, anecdotal, and beautifully moving book. The writing is engaging and creative throughout. A lot of Youtubers have been writing or publishing books lately; I don’t have the space or the knowledge to write about them here, but I will state that whatever may be said about other Youtube authors, Fletcher can certainly write. Of course, the fact that her book is currently topping the Waterstones book chart is not unconnected with her Youtube success, but as with John Green, whose novels I’ve reviewed previously, this doesn’t mean its success is unwarranted. Fletcher’s writing style is adventurous, humorous and unique. The book is engaging for the same reason her Youtube vlogs are – not only because of what she says but how she says it. Her conversational style and inventive turns of phrase are a real joy to read. For example, take the following sentence:

‘It’s as hard as riding a unicycle while juggling three chimps and a watermelon.’

I have no idea where this particular image came from, but I applaud the utter randomness of this sentence. It’s this style which makes the book so thoroughly enjoyable and easy to read. She is apparently now writing a novel, which I am greatly looking forward to.

And yes, All I Know Now is a little bit cheesy at times – but it’s good cheesy, wensleydale rather than stilton. Fletcher’s positivity is so well-meaning and heartfelt that it never feels over-done or disingenuous. In ‘Act 7’ she writes a lot about the importance of being nice for no reason and of the benefits trying to be happy, of seeing the good and beauty in the world – but she also deals with problems of depression and self-harm, in a very respectful, sincere and powerful way. She acknowledges the complexity of individuals, the differences between us all, and so it’s not a book about how to live your life so much as a book about how to think about how to live your life. It’s not about what to do in certain situations, but about how to look at these situations in a different way. It’s about what things to consider and who to turn to when life does go a bit wrong.

As a slight side note, I was lucky enough to see Fletcher discuss and read from her book at London Piccadilly Waterstones last week as part of her book tour. It was an evening of teenage excitement, amazingly-decorated cupcakes and complete joy. The atmosphere was incredible; the love Fletcher inspires in her followers is really quite something. I’m a little bit older than the majority of her audience, but listening to the conversation of the delighted thirteen-year-old’s in the queue behind me really made me smile.

After taking questions about All I Know Now from fellow Youtuber Ben Cook and the audience, Fletcher read a chapter from the book and performed two songs, before doing a book signing. Her energy and natural humour is so impressive, and it was interesting to hear more about her writing process and her feelings about the book. I have been to a fair few book signings in my time. I imagine they are incredibly tiring, but I’ve never met another writer so engaged and enthusiastic as Carrie Hope Fletcher appeared. I don’t really condone judging books purely by their authors, but for non-fiction, when the narrative voice literally is them, the personality behind the book does make a big difference. I was very near the back of the queue, but she greeted me with a smile and a willingness to chat, and told me she liked my earrings. I say this not in the spirit of fangirldom (a term I’m not overly fond of), or to show off my supreme skills in picking out cool teapot earrings, but to get across something important about Fletcher: she is the sort of person that can even make her own book signing more about her readers than about her.

I’ve heard All I Know Now described as a ‘best friend in book form’ (Andrew Kaufman), as a hug in a book. I can see why. It is a truly lovely, comforting, encouraging and understanding book – but it’s also thought-provoking and genuinely very well written. It is a sheer joy to read.

Greatest strength: I suppose the voice and writing style with which the book is writing. It carries the content well.

Greatest weakness: I have nothing to say here. This book is utterly lovely.

Let’s finish on a quote: ‘People are people. Ever changing, complicated, wonderfully layered.’ 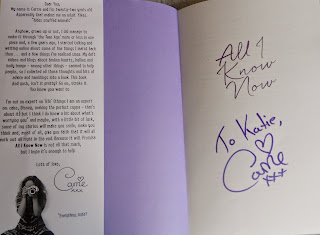