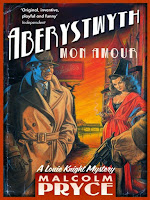 Published in 2001, Malcolm Pryce’s Aberystwyth Mon Amour is the first book in the Louie Knight Mysteries, a comic detective series. It’s set in an alternate 1980s, where Wales is an independent country. The town of Aberystwyth is controlled by the Druids, a sort of magical mafia. They are led by Grand Wizard Lovespoon, the sinister Welsh teacher from the local school, and his other teacher friends. In this strange and original setting, schoolboys start to go missing – and it’s up to Louie Knight, the town’s private investigator, to try and work out just what’s going on.

This is quite a strange book. Pryce launches you straight into the world, with very little explanation. I’ll admit that I did get confused here and there with who everyone was and just what was going on, but very quickly you get immersed in the plot and world. I really enjoy the sheer randomness of this book. You never know quite what’s coming next, in either the world or the plot, and this alone makes you keen to read on.


What I like best about Aberystwyth Mon Amour is the details. It is full of fun and strange intricacies which show a great deal of imagination on Pryce’s part. A lot of these are just casually slipped in with little explanation, which I really enjoy. I love that Louie’s father runs a donkey sanctuary and goes by the name of Eeyore. I love that Louie’s assistant (his Watsons or his Hastings, if you will), ends up being a teenager girl known as Calamity Jane. I love that drugs are sold and smuggled in the oddest of household items. I love that the town’s brothel, The Moulin Club, is on Patriarch Street. I love that the Mafia is run by schoolteachers – and so many other little details. I imagine that for readers who have lived in or even visited Aberystwyth (I have not), there would be even more great jokes that I missed out on. I love that for all the darkness and strangeness of what’s going on, the book is so consistently and brilliantly funny.

The characters too are well-drawn, weird and interesting. They at times feel slightly Dickensian in their exaggerated and almost grotesque characterisation, but I really like that. They’re characters that suit the world they inhabit. Pickel, whose position in the Druids is juxtaposed by his love of clocks, was one of my favourites, as was Ma Evans, who works at the Witch’s Co-op, and Sospan, the philosophical ice-cream man. However, my very favourite character was probably Calamity Jane. Her friendship with and constant mocking of Louie really added to the book, and was not only hilarious but at times quite lovely and moving. I’m looking forward to coming across her again in the rest of the series.

I think I preferred the book’s intricacies to the overall plot. Now, in some ways the mystery plot is brilliant. I like that there are new surprises even when you think there’s no room for any more twists and turns. And I do to an extent like just how ridiculously complicated everything becomes. However, on the other hand there were moments when I had just no idea what was going on, when I think perhaps I was supposed to. I got especially confused by the background history about the war of independence, and the mythical (I think; I’m still not entirely sure) kingdom of Cantref-y-Gwaelod. There are a few times that I feel Pryce gets carried away with the brilliancy and humour of his ideas, and therefore doesn’t slow down to make them entirely clear to the reader. There are also quite a lot of characters for a fairly small book. Overall, however, I think this is mainly because we’re getting used to a complicated and different world at the same time as trying to follow a complex plot. So I’m looking forward to reading some more in the series, where that at least won’t be a problem.

Despite some minor confusion, this really is a delightful and enjoyable novel. It’s original, quirky and eccentric – all things I like in a book. As I’ve said, it’s really the details rather than the overall plot that made it for me, but these little details are so clever, funny and well thought out that I still really enjoyed the book, even if I wasn’t always entirely clear what was happening. It’s the humour and the world I found most engaged it, rather than the mystery. However, this didn’t lessen my enjoyment of the book, and I’m excited to read the rest of the series.

Greatest strength: Probably the random beauty in the attention to detail, which helps create this inventive and funny world.

Greatest weakness: As I said, I did at times get a little confused.

Let’s finish on a quote: ‘Aberystwyth was a great place for a connoisseur of irony.’

With thanks to Zoë for the recommendation.

Last Review: All I Know Now, by Carrie Hope Fletcher